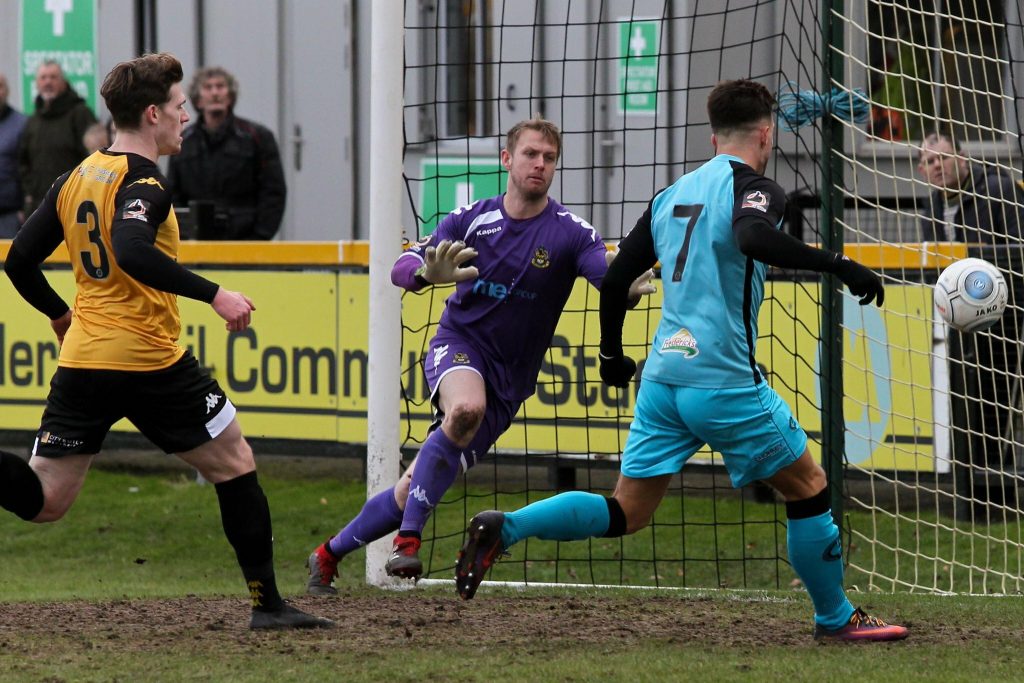 John Askey took charge of his first game in charge of Port Vale, new BKM client Alex Newby was on top form and another clean sheet for Shwan Jalal for Chesterfield, take a look at how all our clients go on over the weekend.

Jordan Clark started on the wing for Accrington Stanley on Saturday afternoon as they travelled to Scunthorpe in League One. Stanley started well, but it was the home side who broke the deadlock. Kyle Wootton received the ball on the edge of the area and dipped the ball over the Stanley keeper with the outside of his foot to make it 1-0. In the 40th minute Kevin Van Veen was introduced for Scunthorpe, and just two minutes later found himself on the scoresheet. Van Veen turned his man on the edge of the area and curled the ball into the far corner to double his sides lead. Stanley were the better side throughout the second half but couldn’t seem to find a way through the Scunthorpe backline. Their best chance arguably came in added time, when our client Clark found Zanzala racing into the area, but the frontman couldn’t quite keep his effort on target and fired wide. The game ended in defeat for Stanley.

Kieran Wallace featured on Saturday afternoon for Burton Albion as they took on Wimbledon away from home. The Brewers started off lively, causing numerous issues in the opening ten minutes, and in the 12th minute they found a breakthrough. Marcus Harness surged forward and found an opening thanks to a lovely piece of skill before playing through Jamie Allen who found the back of the net. 1-0 Burton. Despite making numerous more chances before-hand, it took the Brewers until the 57th minute to double their lead. Liam Boyce received the ball just outside the box and slipped through David Templeton on the left who struck a low drive into the far corner. The Brewers were in complete control, and our client Wallace was introduced in the 63rd minute to help see out the game. In the 90th minute Wallace came close to making it 3-0. Lucas Akins did extremely well down the right-hand side before bringing the ball inside and pulling it back for Wallace. He tried to place his effort into the bottom corner but couldn’t quite keep it on target and in the end the game finished 2-0 to Burton.

John Askey returned to management this weekend, taking his new Port Vale side to Cambridge United. The Valiants stated off the stronger of the two sides, coming very close in the 8th minute when Tom Pope came one-on-one with the Cambridge keeper, but the forward couldn’t quite finish. Just over ten minutes later there was a chance at the other end of the pitch, and the hosts made it count. David Amoo found space to get a shot off and, thanks to a massive deflection, gave his side the lead. Pope continued to look dangerous all throughout the game, with a penalty shout in the 28th minute, but there was no way through, and Askey’s men went in behind at the break. Vale had a number of good chances in the second half. Luke Hannant looked set to score only for the Cambridge keeper to pull off a world class save. Pope and Hannant linked up in the 77th minute looking for the equaliser, but Hannants volley was just wide. Unfortunately, there was no way back into the game for Askey’s men, and the game ended in defeat.

Danny Whitaker was on the side-line with Sol Campbell as the Silkmen hosted Crewe Alexandra in the Cheshire Derby. The game got off to a poor start for Macclesfield when Jordan Bowery scored for the visitors in the 3rd minute. The Silkmen looked for a quick response, and just over ten minutes later they found it. Scott Wilson latched on to a through ball from Michael Rose and dinked the ball past the keeper the level the score. In the 32nd minute Macclesfield found themselves in trouble again. Nathan Cameron’s back pass was too short and forced Kieran O’Hara into a reckless challenge to concede a penalty. Chris Porter stepped up to take and made no mistake with the finish, restoring Crewe’s lead. The Silkmen were searching for another equaliser for a while, but it finally came in the 74th minute after a mishap from the Crewe keeper. Rose sent his corner in and the keeper leapt to catch the ball but fell back into his own net to give Macclesfield hope. That hope seemed to be gone when Crewe grabbed their third goal of the game in the 95th minute. George Ray met a Crewe corner and scored what looked like the winner, but the game wasn’t over just yet. Macclesfield brought the ball forward and Reece Cole tried to play Cameron through in the area. The Crewe defence managed to intercept but couldn’t quite get the ball clear and Cole ran on to meet it on the edge of the area and fire home, salvaging a point for the Silkmen in one of the most exciting ends to a game this season.

Shwan Jalal was between the sticks for Chesterfield this weekend as they hosted FC Halifax Town in the National League. The Spireites dominated proceedings throughout the first half, and despite a few chances for Mar-Antoine Fortuné and Jonathon Smith to name a few they went in at the great goalless. Chesterfield started out off the second half in the same vein, causing numerous problems for the opposition. In the 68th minute our friend Scott Boden was brought down in the area, and he stepped to take the penalty and calmly slotted home in his first game since re-signing for Chesterfield. Boden’s goal was the difference in the end, with the Spireites recording their 6th victory of the season, as well as another clean sheet for Jalal in goal.

New BKM client Alex Newby started for Chorley FC as they travelled to Southport for their National League North fixture. The hosts were the first to break the deadlock thanks to Jack Sampson, who was first to react after a free-kick was parried out. Just ten minutes later Southport had doubled their lead. Devarn Green latched onto a pass just outside the area and fired into the bottom corner. In the 27th minute Southport made it three. Dion Charles slotted the ball home from the spot for the hosts to rub salt in the wounds for Chorley. Just two minutes later Chorley finally broke through. Elliot Newby played a great cross into the box and his brother Alex was there to tap it in and pull one back for his side. The hope of a comeback was short lived however, as in the 37th minute Charles scored his second of the game. He received the ball just outside the area and side-stepped two Chorley defenders before placing it into the bottom corner. Chorley came out in the second half looking much stronger, and in the 56th minute the pulled one back. Alex Newby was once again on the score sheet to give his side some hope. Chorley continued to press for the remainder of the half, but in the 90th minute Southport really finished the game. Sampson scored his sides 5th of the game after Marcus Wood squared the ball into the area for him. 5-2 to Southport. In the dying moments of the game, our client Alex Newby completed his hat-trick, heading home for his side, but it was too little too late and the game ended 5-3 the Southport. Whilst it was a disappointing afternoon for Chorley, they remain top of the National League North, and on a personal note our client Alex Newby completed his first career hat-trick to top off an impressive individual performance.

Sam Minihan started at right-back for Stockport County as the Hatters travelled to Guiseley in the National League North. County got off to a flying start, and saw the ball in the back of the Guiseley net within ten minutes courtesy of an Ash Palmer header, only for it to be ruled out for offside. It took until the 43rd minute before County finally broke the deadlock. Matty Warburton’s deflected shot was parried out by the Guiseley keeper right into the feet of Darren Stephenson who tapped it in from close range. After half time Guiseley came out fighting, and in the 56th minute they got an equaliser. Cliff Moyo and George Cantrill linked up well on the right before the latter fired in from the right-hand side. The rest of the game saw both sides looking dangerous, but neither could produce the end product and the game ended 1-1.

Steve Watson and his York City side were also in action in the National League North, hosting Ashton United. Fellow BKM client Wes York started for the hosts, and had the first chance of the game in the opening few minutes when he beat the full-back before sending a dangerous cross into the area, only for the keeper to collect. Despite a number of chances for Watsons men, they went in at the break at 0-0. York City continued to press in the opening period of the second half but it seemed there was no way through for them, that was until the 83rd minute when Jordan Burrow finally broke the deadlock. He curled a shot from the edge of the area to beat the Ashton keeper at the bottom left post and give his side the advantage. Just 7 minutes later, Burrow doubled both his and his teams tally for the game. He received the ball 20 yards out before sending the ball curling over the keeper and into the back of the net to secure the victory. This game was Watson’s first home victory with York City, and sees his side sit in 15th place in the National League North table.

Mark McManus started at the heart of the North Shields defence as they travelled to Newcastle Benfield for the second time in 4 days. The Robins were the first to open the scoring thanks to Gary Day. Craig Spooner went on a great run before playing in Day, who rolled the ball past the opposition keeper. Ryan Carr was next on the scoresheet for the Robins. Spooner was the provider again as he found Carr in space before the latter finished well. Just before half-time Benfield pulled one back thanks to Scott McCarthy. The sides went in at 2-1. Not long into the second half North Shields grabbed a third. Youngster Cam Cunningham was on hand to provide a calm and collected finish to restore his sides two goal lead. Just ten minutes later the Robins made it four. Carr was once again on the scoresheet with a fantastic finish to all but finish the opposition off. Despite an 80th minute goal for Benfield, North Shields saw the rest of the game out to record a deserved 4-2 victory.

Our final client in action over the weekend was Alireza Beiranvand. His Persepolis side faced Foolad away from home in the Iran Pro League. It was a disappointing game for Persepolis, going 2-0 down in the first half thanks to goals from Mehdi Zobeydi and Luciano Pereira Mendes. Despite an 85th minute goal from Kamal Kamyabinia, Persepolis couldn’t find a way back into the game and suffered their first defeat of the season. Persepolis are currently placed 2nd in the Iran Pro League, just one point behind league leaders Sepahan.