This Weekend at BKM 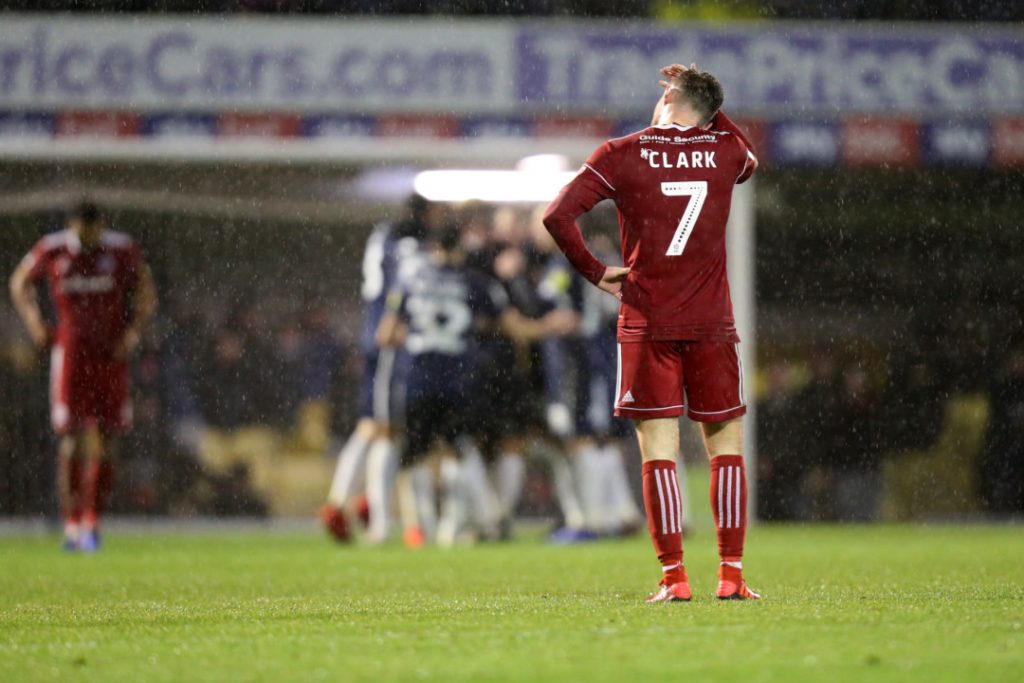 There were numerous BKM clients in action over the weekend, here’show they got on.

Jordan Clark Started on the right-hand side for Accrington Stanley as they travelled to Southend United. Accrington started off looking lively, with numerous chances in the opening ten minutes. Billy Kee was the first to try his luck, but his close-range effort flew over the bar. Sam Finley came close just a minute later. He took three men on and found his way into the area before unleashing a dangerous outside of the foot shot that went just wide. Finley was involved again just moments later as he made a bursting run down the wing before cutting back to Offrande Zanzala, but the Stanley striker could only find the side-netting. In the 19th minute, against the run of play, Southend United took the lead. Simon Cox’s header was saved by Connor Ripley in the Stanley goal, but Sam Mantom was there to find the back of the net and give the hosts the lead. Just four minutes later Southend United doubled their lead. The hosts took a short corner to Stephen Hendrie who drilled the ball into the box. Ripley was there to meet it but couldn’t hold on and Cox was there to poke the ball home. Accrington tried to bounce back but went in at the break 2-0 down. Stanley came out fighting in the second half, with Zanzala having a good chance in the opening five minutes, but his shot was blocked. The pressure continued from Stanley, with Daniel Barlesar, Sean McConville and Clark all linking up well in attack. In the 65th minute Zanzala had a great chance. Clark beat two men on the right and sent the ball into the box, but the referee called for a foul on the defender from Zanzala. In the 72nd minute Southend grabbed another goal. Cox played in Theo Robinson who managed to beat the offside trap and place the ball past Ripley and into the net. Stanley continued to push for a way back, and even found the back of the net through Connor Hall before it was ruled offside, but it wasn’t to be, and the game ended 3-0 to Southend.

Danny Whitaker and his Macclesfield teammates hosted Crawley Town at the weekend in Sol Campbells first game at the Moss Rose. Whitaker started in the centre of the midfield for the Silkmen. Macc got off to a good start, with Elliot Durrell looking dangerous on the wing. He sent a great ball into the box for Harry Smith, but the Crawley keeper managed to get there first. Smith and Durrell continued to link up throughout the first half, with both men having chances, and in the 31st minute Durrell opened the scoring. A defensive mishap saw the ball drop to Durrell who struck a fantastic half-volley from 25 yards out to give the Silkmen the lead. Whitaker almost doubled the lead for Macc just moments when he received the ball on the edge of the area and had a go. His shot was blocked and went behind for a corner. Despite a good chance for Crawley towards the end of the half, Macc went in with the lead. Crawley came out fighting for an equaliser in the second half and came very close to finding one in the opening few minutes. Dom Poleon managed to get a shot away from a tight angle, but his effort deflects off O’Hara and goes out. Luke Gambin also came close for the visitors after cutting in from the right-hand side and letting fly, but O’Hara was equal to it and tipped the ball over the bar. The game continued to be a tight affair with both sides looking dangerous, but in the 81st minute Macclesfield finished it off. Michael Rose sent a great ball into the box and Smith was there to head home and double his sides lead. This proved to be the final goal of the game and Macclesfield recorded their third win in the last four games in the league.

Saturday afternoon also saw our client Dan Cowan in action for Stockport County as they travelled to Altrincham in the FA Trophy. In the opening two minutes County had a chance. Scott Duxbury sent in a free-kick from the left-hand side that was met by Elliot Osborne, but he couldn’t keep it down. The game was completely open during the first period, with both sides having chances, but it was County who made it count. In the 22nd minute, Osborne sent a corner into the box and after a poor clearance from Altrincham, Mulhern let fly, only for his shot to deflect off County Skipper Ash Palmer and send the keeper the wrong way. 1-0 to Stockport. After the opener County began to settle the game down and take control. Dan Cowan came close to doubling their lead just moments before half time, but his low drive going just wide. In the last minute of the half Altrincham were reduced to ten men when Jordan Hulme stamped on Jaimie Stott. County started the second half as they finished the first, in total control. Sam Mulhern was looking dangerous and forced Altrincham’s keeper into two great saves. The pressure continued to pile up for Altrincham and in the 75th minute it looked like they’d concede again. Duxbury sent a ball into the box for County and Mulhern met it with his head, but his effort grazed the outside of the post and went out. The Hatters managed to see out the rest of the game and record a 1-0 victory, progressing into the Second Round of the FA Trophy.

Gregor Buchanan started at the back for Greenock Morton on Saturday as they travelled to Falkirk FC. The game got off to an uneventful start, with no real chances coming until the 10th minute. Bob McHugh won a corner for the visitors and Michael Tidser sent the ball in. Falkirk keeper David Mitchell went for the ball and dropped it but managed to snatch it just from the line. Morton had another corner just moments later and Tidser tested the keeper once again, but this time Mitchell was able to punch clear. Chances were scarce throughout the game, with neither side able to control the game. In the 40th minute Morton had their best chance so far. Chris Millar dropped a free-kick into the danger area and Buchanan rose above his challengers to win the flick on. The ball fell to Robert Thomson who went to smash the ball home but just as he went to connect, he slipped and skewed the shot wide. The sides went in level at the break. Falkirk came out looking a lot better in the opening period of the second half. Derek Gaston and the Morton defence were forced to put their bodies on the line to stop the onslaught of Falkirk chances throughout the scramble in the box but eventually managed to clear. After a fiery first five minutes to the second half the game began to die down, with no great chances for either side for a long period of the game. Reghan Tumilty burst down wing in the 72nd minute, but his cross was claimed by Mitchell. Two minutes later Morton had a free-kick and Charlie Telfer tested Mitchell once again, but he kept his team in the game. Buchanan was forced off due to injury in the 77th minute and the game truly opened up after this. Falkirk had a massive chance to take the lead when Paul Paton made a late run into the box, however his header went just past the left post. The final chance of the game fell to Morton. Ross MacLean came in from the left and sent a low drive at the goal, forcing Mitchell into a good save. Telfer came running in for the rebound only for Mitchell to pull off another great save, however the linesman had his flag up for the second effort. The game ended goalless.

Wes York returned to the starting line-up for York City FC at the weekend as they travelled to North Yorkshire neighbours Harrogate Town. Harrogate got off to a lively start when Jack Muldoon forced Adam Bartlett into a good stop in the opening minute. They kept up this pressure throughout the opening stages, with George Thomson and Joe Leesley coming close for the hosts. York City began to grow into the game and had a great chance early on. Jordan Burrow played a great ball to Wes York in the Harrogate area, York, in turn, squared the ball back to Lewis Hawkins but the midfielder couldn’t keep his effort on target. IHawhI  n the 21st minute York City took the lead. A defensive mix-up between the Harrogate defence and keeper saw Alex Bray pick the ball up on the edge of the box and finish into an empty net. York’s lead didn’t last too long, and in the 27th minute Harrogate had equalised. Dominic Knowles took it past Kennedy Digie on the edge of the York area and sent a curling low shot into the bottom right corner to get his side back in the game. Neither team could grab another before half time and went in level. Shortly after the break Wes York burst down the right-hand side and sent a great ball into the box, and whilst a Harrogate defender was there to meet it, he very nearly turned the ball into his own net. In the 66th minute Harrogate finally managed to break through York’s defence a put themselves ahead. Liam Kitching fired the ball in from close range to give his side the lead. Harrogate almost got another in the 76th minute when Warren Burrell hit a great overhead kick, but Wes York was there to save it off the line. In the end there was no way back into the match for York City, and the game ended 2-1 to Harrogate.

Our final client in action over the weekend was Mark McManus,who started at the heart of the North Shields defence at Whitley Bay. NorthShields got off to a great start, with Ryan Carr weaving his way into the boxin the 8th minute, but a Whitley defender was there to produce agreat last ditch tackle. Callum Johnston and Sean McRoberts both came closebefore the break, but the sides went in level. It took until the 51stminute before a goal was scored. McRoberts had a go from a long way out and, aftera slight deflection, beat the goalkeeper. Whitley almost equalised instantlywhen Kevin Carr received the ball on the penalty spot, however North Shieldskeeper Greg Purvis was there to save. As the game went into the final stages itseemed it was set for a tight conclusion however substitute Gary Day had otherideas. Full back Jack Donnison went on a mesmerising run down the wing for hisside and delivered a great cross for the North Shields striker to strike home.Day was in again just moments later after a wayward back pass ended up withhim. With all the space in the world Day ran at the Whitley goal and eloquentlyfinished to secure a victory for his side.