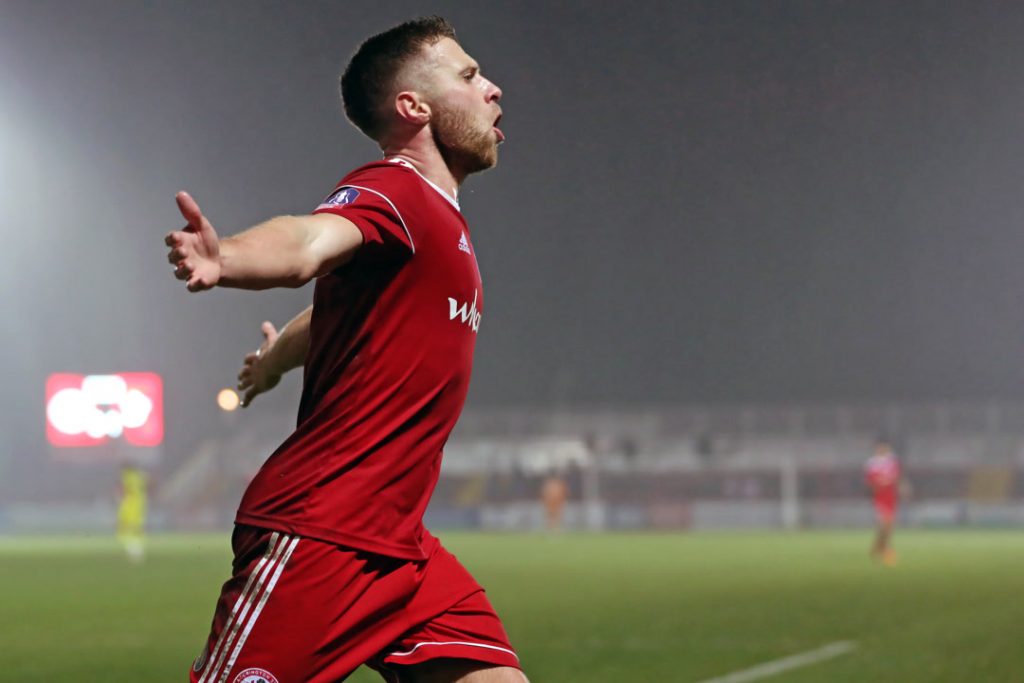 There were several of our clients in action over the weekend just gone.

Jordan Clark played a vital part in Accrington Stanley’s thrilling FA Cup tie at home to Cheltenham.  Clark started on the right-hand side of the Stanley midfield four. The game had a slow first half, with neither side looking dangerous at all. Stanley came close just before the 40th minute, with Sean McConville sending a low ball across the box for Billy Kee, by he couldn’t quite connect. Just a minute later McConville had a chance for himself, having a go from the left-hand side, but Cheltenham keeper Scott Flinders was able to keep it out. The first half ended all square with all to play for in the second half. Stanley made a great start after the break, with out very own Jordan Clark sending teasing ball into the Cheltenham area. Substitute Offrande Zanzala latched onto the ball and headed home from close range to give Stanley the lead. Just seventeen minutes later Stanley doubled their lead. Kee finally grabbed a goal after coming close in the first half. Zanzala was played through and burst into the box only to be brought down. The resulting penalty was left for Kee to finish, and his right footed strike whipped right into the top corner, leaving the keeper with no chance. Cheltenham bounced back only minutes later however, with Alex Addai getting on the scoresheet for the visitors. Stanley were determined not to let their lead slip, and in the 78th minute they found a third goal to end any hope of a Cheltenham comeback. Clark received the ball on the right and played a lovely one-two with Kee to get himself in the area. He ran at the keeper and rolled the ball around him before finding the back of an empty net to finish a fantastic solo effort. Clark’s goal proved to be decisive as Stanley comfortably saw the rest of the game out to record a 3-1 win and progress to the next round of the FA Cup.

Sam Minihan and Daniel Cowan also featured on Saturday, with both players taking part in Stockport County’s game at Barnet. The BKM pair started at right and left back respectively as County went into the game hoping for a win to progress into the next round of the FA Cup.  The Hatters got off to a poor start, going behind in the 8th minute thanks to a Dan Sparkes goal for Barnet. County really kicked on after the goal, with Sam Walker coming close in the 22nd minute. However, Barnet almost doubled their lead just a few minutes later when Dan Sweeney met a corner with a great header. Hinchcliffe got a touch, but it wasn’t enough as the ball looked like it was going in when Minihan appeared to clear it of the line. The rest of the half continued in the same vein really, with County looking the more dangerous of the two but they couldn’t pull one back before half time. After the break County continued to push forward, with Darren Stephenson and Sweeney looking particularly dangerous. The second half saw County dominate procedures, always pressing the defence and causing issues. They won an array of corners throughout the half, coming close on multiple occasions. As the game was coming to a close the Hatters were throwing everything at Barnet, but it wasn’t to be, with the game ending 1-0 to the home side.

Saturday also saw Gregor Buchanan in action for Greenock Morton FC in their game against Dunfermline Athletic. Morton got off to a very poor start, in the fourth minute they went behind thanks to an Aidan Keena finish from a rebound. Just four minutes later Dunfermline almost doubled their lead when Keena sent an in swinging free-kick into the box from the right-hand side. The ball was just out of reach of everyone but hit the far-left post. Daniel Devine met the rebound and struck the ball against the crossbar before Morton eventually cleared. Dunfermline continued to press with Jackson Longridge firing a low shot towards the Ton goal, but Derek Gaston was equal to it, pulling off a fantastic save to keep his side in the game. In the 41st minute Dunfermline grabbed a second. Faissal El Bakhtaoui went down in the area and stepped up to take the resulting penalty. He slotted the ball into the bottom fight corner, just beyond Gaston in the Morton goal. Buchanan and the Morton lads went in at half time 2-0 down. Dunfermline continued to look the better of the two sides throughout the second period, with Keena and El Bakhataoui causing problems. Morton did have a few chances, Bob McHugh had a header just glance over the bar. In the end it was Dunfermline who got the goal. In the 85th minute James Craigen fired a rebound into the roof of the net after Gaston parried a header back out. The game ended in a disappointing 3-0 defeat for Greenock Morton.

Steve Watson and his Gateshead side travelled to league leaders Leyton Orient on Saturday afternoon. The Heed were looking dangerous in the opening period. Greg Olley had a chance from fifteen yards out but couldn’t quite get enough power on the shot. Just five minutes later Olley came close again. The Heed midfielder cut inside from the left but saw his 25-yard strike fly just wide of the Orient goal. Watson’s men continued the attack, with Luke Molyneux and Liam Armstrong causing issues, but Orient showed how deadly they can be on the counter in the last few minutes of the half. Josh Koroma almost finished of a fantastic counter-attacking move when his strike from 30-yards rattled against the crossbar. Despite a shaky finish, Gateshead went in level at the break. The game completely changed in the second half, after sitting back for a lot of the first half Orient came out fighting in the second. Within 10 minutes they had already won four corners and looking dangerous from each one. In the 59th minute Orient eventually broke through. Koroma beat the Gateshead offside trap before cutting in and firing the ball straight into the top corner. 1-0 to the hosts. After a slow start to the second half, Watsons men seemed to kick on after conceding. Steve Rigg came close after a Scott Barrow cross, and Tom White hit a volley just wide of the post. Gateshead went into added time still chasing a goal but definitely in the game, that was until 96th minute. Macauley Bonne met a James Alabi square ball to finish in an empty net and double their lead. There was even more drama in the dying moments of the game when Olley was shown a second yellow and given his marching orders. A disappointing end to a disappointing game for Steve Watson’s men.