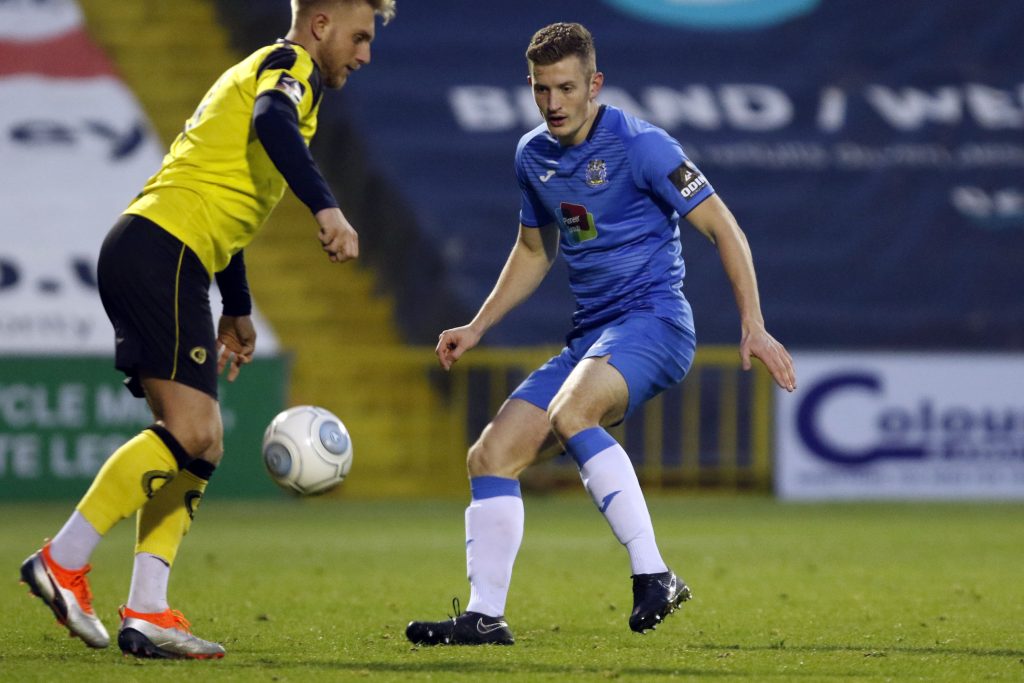 We had several clients in action throughout the football league this weekend.

Jordan Clark started on the right-wing for Accrington Stanley during their game at Rochdale on Saturday afternoon. The game began in an end-to-end fashion. Daniel Barlaser came close in the opening minute, but his strike from range was put out for a corner. Rochdale instantly retaliated, with Joe Rafferty’s ball into the box being put behind by Stanley defender Mark Hughes. The game continued in the same vein throughout the first half, with Barlaser and Nick Anderton both having chances for the visitors. Both sides went in at the break at 0-0, despite heavy pressure from Rochdale towards the end of the half. Stanley came out fighting in the second half. Jordan Clark began pressing down the right-hand side, causing the Dale defence numerous problems. He sent a ball into the box, but nothing came of it. In the 63rd minute Rochdale finally found a way through. Ian Henderson put the hosts in-front after a corner. Clark came close just 10 minutes later. Offrande Zanzala sent the ball in from the left and Clark rose to beat the Rochdale defender, but couldn’t keep in on target and Rochdale got a goal kick. Stanley’s attacking players were doing all they could to find a way back into the game. Barlaser, Billy Kee, Clark and Zanzala were all linking up well in search of an equaliser, but it was to no avail as the hosts saw out rest of the game to secure a 1-0 victory.

Danny Whitaker started in midfield for Macclesfield Town at the weekend. The Silkmen hosted Yeovil Town at Moss Rose. Yeovil got off to a good start, instantly putting Macclesfield on the back foot through. François Zoko found the back of the net in the opening five minutes, but the linesman’s flag was raised for offside. Wes McDonald was looking dangerous for the visitors and came close twice in just 3 minutes but failed to keep either effort down. Macclesfield began to gain a footing in the game after sustaining early pressure and started to get forward themselves. Elliot Durrell had a great chance in the 15th minute after Ryan Lloyd broke down the left-hand side. Lloyd played a clever ball right across goal and found Durrell in space, but he fired his shot just wide. Our client Danny Whitaker came close just four minutes later, but his close-range chance was saved off the line by the Yeovil defence and cleared out. In the 21st minute the match saw its second goal disallowed, this time it was for the Silkmen. Durrell sent the ball in for front-man Harry Smith to find the back of the net, but the flag was up for offside. Macc keeper Kieran O’Hara produced a few good saves in the closing stages of the first half, denying Alex Pattison and Tom James from giving the visitors the lead, and the sides went in level at the break. Early in the second half Macclesfield had a chance. Harry Smith received the ball in the area, but the striker couldn’t keep his shot on target. Yeovil came very close in the 56th minute. Alex Pattinson had his shot deflect past O’Hara and head for the goal, but David Fitzpatrick was there to clear of the line. Macclesfield had a great opportunity just after the 70th minute. Durrell was taken down in the Yeovil area, winning a penalty for the Silkmen. Michael Rose stepped up to take and slotted the ball home to give Macc the lead. Lloyd could have doubled the Silkmen’s lead in the 77th minute when Smith nodded the ball down for him in the area, but Lloyd couldn’t connect well enough with the ball and skewed his chance. Danny and his men would see out the rest of the game and record a 1-0 victory.

Stockport Country hosted Chorley on Saturday afternoon in the FA Trophy, with Dan Cowan starting at right-back for the hosts. The game got off the thrilling started, and just five minutes in Chorley had a penalty. Adam Blakeman stepped up to take the penalty for the visitors. Blakeman struck it well but County keeper Ben Hinchliffe was equal to it and kept the score level with a fantastic save. The Hatters began to press up the other end, with Adam Thomas receiving the ball on the edge of the area. He controlled it well, but his half-volley went just past the right post. Both teams looked dangerous throughout the opening exchanges, but it was County who grabbed a goal. In the 18th minute Scott Duxbury sent in a great cross only to win a corner. The resulting corner was slotted home by Ash Palmer to give County the lead. Just three minutes later County had another corner and Palmer was there to meet again, but the referee called for a Chorley free-kick after a slight shove from the County defender. Chorley were continuing to cause problems for the County back-line in hope of getting back into the game, but they couldn’t find a way through and went in behind at half-time. With the game still an open contest, both teams came out in need of a goal. Chorley had a few chances, with Louis Almond and Jordan Lussey coming close, but it was County who took their chances and in the 53rd minute they doubled their lead. Elliot Osbourne sent in a corner from the left, and Jamie Stott met it well to double County’s lead. It only took two more minutes before the Hatters struck again. Duxbury sent in a cross from the left-hand side, and Thomas was there to head it home and give his side a 3-0 lead. Chorley kicked on in hopes of a comeback. Both Newby twins were looking dangerous, but it wasn’t to be, and County recorded a fantastic victory.

Steve Watson took his Gateshead side to Barnet on Saturday. The game got off to a very slow start, with neither team having any chances in the opening fifteen minutes. It was Gateshead who had the first chance, with Tom White finding Scott Boden at the back post. His header was close, but Barnet keeper Mark Cousins managed to keep it out. Just four minutes later Gateshead had another chance. Gregg Olley sent the ball in from the right, and Boden was there again to meet it, this time finding the back of the net and giving the Heed the advantage. Charlee Adam came close to pulling one back for the hosts in the 28th minute. Josh Walker broke down the right for Barnet before pulling the ball back for Adam on the edge of the area. His first-time shot was struck well but went just past the bottom left corner. Barnet continued their pressing, with Callum Reynold’s and Cheye Alexander both having chances, but neither could capitalise. Gateshead held their lead until half time and came out looking to double their advantage in the second half, but it was Barnet who were looking the more dangerous of the two. Walker was causing trouble again down the right-hand side and managed to get a shot away, but his effort was from too tight of angle to keep on target. In the 52nd minute Gateshead had their best chance since the opening goal when Luke Molyneux found himself with space on the edge of the area. He let fly with a great strike, but his shot rattled against the crossbar. Just five minutes after coming agonisingly close to doubling their lead, Gateshead conceded. Walker once again broke down the right and managed to get the ball into the Heed area. A poor clearance out from the Gateshead defence saw the ball land to Barnet defender Jack Taylor, who hammered the ball into the top corner from fifteen yards out. The game was now completely wide open, and both sides stepped up their game. Taylor linked up with Barnet midfielder Wesley Fonguck on the edge of the area to give the hosts a good opportunity, but Gateshead goalie Aynsley Pears kept it out. In the 76th minute there was finally a goal. Molyneux carried the ball out for the Heed before spreading the play to Scott Barrow. Barrow laid the ball off to Luke Armstrong, who found the bottom right corner to give his side the advantage. Gateshead would see out the rest of the game and take all three points, despite a great chance for Barnet in stoppage time.

Our final client in action over the weekend was Gregor Buchanan, who started at the heart of Greenock Morton’s defence during their game against Peterhead. Peterhead almost got off to a dream start when Jamie Stevenson’s long-range effort caused Derek Gaston problems in the Morton goal. The home team keeper parried the shot but managed the scramble the ball just wide of the post to save an embarrassing start to the game. Morton gained some footing in the game after a shaky start. Gary Oliver had a great chance in the 7th minute but his strike from inside the box is deflected wide. Just a minute later Bob McHugh sent a low, driven cross into the area. Wing back Jack Iredale lunged to connect with the ball, but he couldn’t quite reach it. Morton were causing a lot of problems throughout the first period of the game, but in the end it was Peterhead who managed to take the lead. Ryan Dow broke free down the right-hand side before picking out Scott Brown in the box. The midfielder struck it first time to beat Gaston in goal and give the visitors the lead. It didn’t take too long for Morton to get back into the game. In the 40th minute Iredale sprinted down the bye-line to keep the ball from going out. He sent a cross towards the near post where McHugh was there to finish with an incredible bullet header. The sides went in level at the interval. After the break Morton came out fighting. Reghan Tumilty charged down the line with the ball before letting fly with a thunderous driven strike. Peterhead keeper Greg Fleming was called to action and pulled of a great save to keep his side in the game. Morton continued the rest of the game looking the better side, but unfortunately couldn’t find a way through. In the final minute of the game it looked like they might grab a winner. Substitute Robert Thomson sent in a great ball to the front post and McHugh was there to meet it, but he couldn’t keep his header on target and headed just wide. The game ended level.