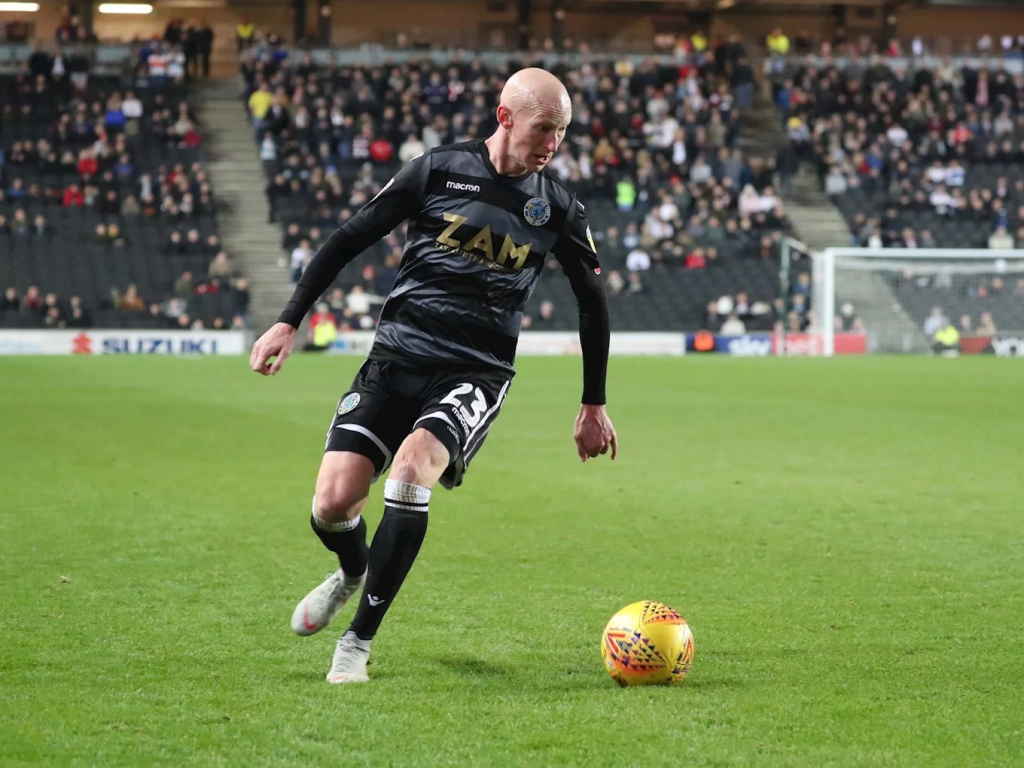 Accrington Stanley hosted Barnsley on Saturday afternoon, with our client Jordan Clark starting on the wing for them against his former club. The winger got of to a good start, with a short corner in the 5th minute eventually finding him on the edge of the area. Clark let fly and forced Barnsley keeper Jordan Smith into a great save. Stanley kept up the pressure, and just two minutes later Sean McConville struck a fierce strike, only for Smith to turn it behind for a corner. The game slowly began to even out with Barnsley applying a lot of pressure, forcing Stanley to defend in numbers. In the 19th minute Stanley broke and won a free kick. McConville stepped up to take but hit the wall. The ball landed for Clark who struck the ball well on the volley, but it was blocked and cleared by the Barnsley defence. The game would continue in a similar fashion for most of the half, with both sides having opportunities to open the scoring, and in the 36th minute Barnsley took their chance. Kieffer Moore found Cauley Woodrow in the area and he slotted home to give the visitors the lead. Stanley instantly looked to get themselves level, with Clark surging the team forward whenever he could, but there was no breakthrough and they went in behind at the interval. Barnsley started the second extremely well, with two chances in the first three minutes, but Stanley began to grow back into the game. In the 64th minute there was a little bit of hope for Stanley, as Barnsley man Zeki Fryers received a straight red for a horrible foul on Callum Johnson. The game completely opened up at this point with both sides looking dangerous on the break but in the end, there was no way back for Stanley. In the 94th minute of the match Barnsley got a second to spoil any chance of a comeback, as Moore got a goal for himself after Brad Potts’ effort was saved.

Saturday afternoon also saw the return of Danny Whitaker to the Macclesfield Town starting eleven as his side took on MK Dons. The Silkmen were looking lively during the opening period of the game, with Ryan Lloyd and Elliot Durrell both causing trouble down their wings. Ben Stephens was looking dangerous, and after an effort from the edge of the area was blocked, he glanced a header just wide of the past. New boy Nathan Cameron was looking very impressive, pulling off some incredible challenges to stop the Don’s attacks. There were a few more chances before the break, with Stephens and Whitaker both coming close, and although Macc had to sustain some serious MK Don’s pressure they held out and went in level at the break. Both teams came out fighting in the second half. Cameron was instantly called upon in the 47th minute as the Don’s broke on the counter. They sent the ball into the area for Chuks Aneka, but Cameron was there to intercept. Whitaker had a chance just moments later, but his strike from the edge of the area went straight at the keeper. In the 53rd minute MK found a way through. Kieran Agard received the ball on the edge of the area and curled it into the bottom far corner to give his side the lead. Agard almost grabbed second just a minute later, but Kieran O’Hara managed to keep it out. The Silkmen came close in the 60th minute. They were awarded a free kick in a good position, but Michael Rose couldn’t clear the wall. The ball bounced back to him and he smashed it at goal, but his shot flew inches past the post. In the 65th minute MK Dons doubled their lead. Agard beat the Macc offside trap and placed the ball past O’Hara in goal for his second of the match. The Silkmen tried to force a way back into the game, with Harry Smith and Koby Arthur coming close in the closing stages, but it wasn’t to be, and the game ended 2-0 to MK Dons.

BKM duo Sam Minihan and Dan Cowan both played a part in Stockport County’s Saturday afternoon fixture against Brackley Town. The game got off to a slow start, with neither team looking to dangerous in the first fifteen minutes. In the 17th minute County attacked on the counter but Scott Duxbury couldn’t get on the end of an Adam Thomas cross. Warburton came close from just inside the box in the 25th minute, but he couldn’t find a way through. In the 28th minute of the match Brackley had their first attempt of note. Lee Ndlovu struck a ball from distance and forced County keeper Ben Hinchliffe into a good save. Minihan and Warburton linked up on the counter attack just moments later, but the latter’s shot was saved. The sides went in level at half-time. At the start of the second half, Minihan surged down the right hand initiating an early counter attack for the hosts, but it was seen behind by the Brackley keeper. Brackley begin to threaten a little more as the half went on, and in the 60th minute they found the back of the net. Connor Franklin played a looping ball into the County area, and Ndlovu rose the highest to head home for the visitors from close range. Seven minutes late Brackley almost doubled their lead, as Connor Hall headed over Hinchliffe, only for Ash Palmer to save it off the line and keep County in it. Brackley continued with their pressure on the counter attack, and in the 74th minute found themselves with three against two heading towards the County goal. Minihan bravely through himself in the way of Matt Lowe’s strike to keep it off target. This pressure continued right until the death, with County looking more and more unlikely of finding an equaliser, but in the very last minute of the game they found a way through. Duxbury sends a corner into the area and Frank Mulhern was there to meet it, securing a last-gasp equaliser.

Gateshead boss and BKM client Steve Watson saw his side host Sutton United at the weekend. The Heed got off to a good start early on, Scott Barrow coming close from a 30-yard free-kick in the 4th minute. Greg Olley was the next person the have a pop, with a 20-yard low drive just tipped around the post by the Sutton keeper. Suttons first chance of the game came in the 16th minute, as Harry Beautyman whipped a ball into the Gateshead area, only for Charlie Clough to head it over. Gateshead continued to look dangerous going forward, with Steven Rigg, Mike Williamson and Mark Armstrong all coming close before the break, but none could find a way through and the teams went in level. Sutton started the second half much better than the first, and within 10 minutes they had two chances from corners, but both Clough and Tom Bolarinwa failed to find the back of the net. In the 60th minute Scott Boden came on the replace Rigg, and Gateshead seemed to get back into the game. Both teams had numerous chances, but neither could find a way through, with the game ending in a goalless draw.

Our final client in action over the weekend was Gregor Buchanan. Buchanan started at the heart of Greenock Morton’s back three as they travelled to league leaders Ayr United. Ayr started off well, forcing Morton left back Jack Iredale into pulling of a fantastic interception to stop a goal bound Lawrence Shankland for the hosts just seven minutes in. Morton started to retaliate and get forward themselves, with Gary Oliver causing trouble for the Ayr defence down the right wing. Oliver came close in the 36th minute after breaking through the Ayr back line and getting through on goal. The angle was too tight unfortunately and the subsequent effort was blocked away. Morton seemed to gain confidence from this and started to take control of the game and broke with another counter attack seeing Bob McHugh through on goal. He beat the Ayr keeper but couldn’t keep his effort on target. The teams went in at half time level, with Morton arguably looking more dangerous. Ayr came back out after the break looking revitalised and instantly put pressure on Morton. In the 48th minute former ton youth player Declan McDaid looked to play in Craig Moore for the hosts, but his header was wide. Just as Ayr were starting to get back in their stride, they were reduced to ten men. Craig Moore sees red after kicking out at Buchanan following a confrontation between the two.  This gave Morton even more of a chance to find the winner and they pushed on with Oliver coming close twice in two minutes, but unable to find the back of the net. The game continued in the same vein, with Morton constantly troubling Ayr, and in added they came agonisingly close to a winner. Ross MacLean sent an in swinging corner into the box and Buchanan was there to meet it, only for his effort to be cleared off the line in the dying moments. This proved to be the final chance of the game as it finished all square.