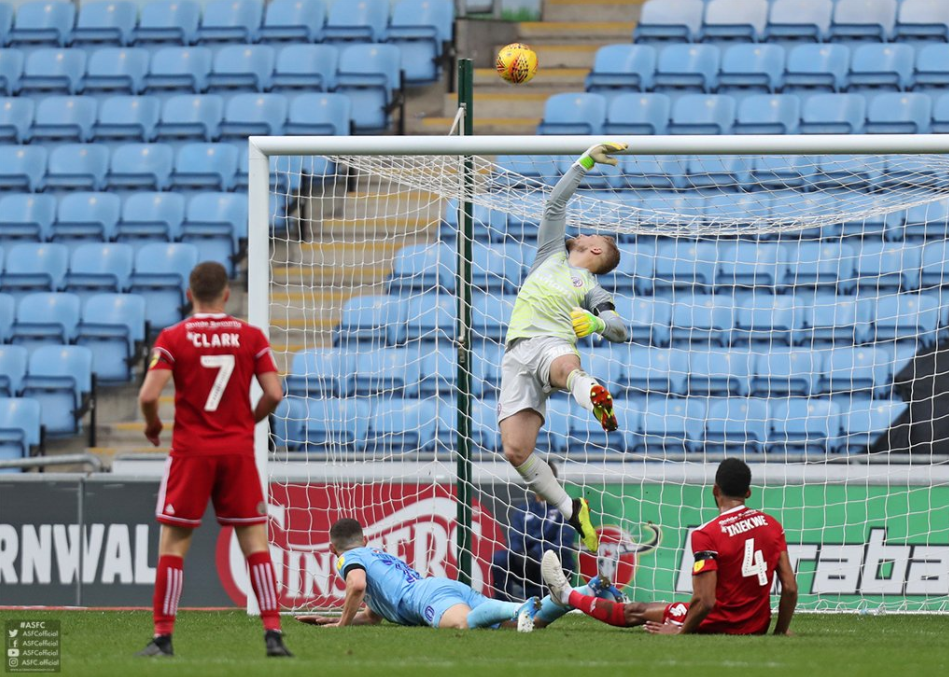 Our two newest clients, Sam Minihan and Dan Cowan, were both in action on Saturday afternoon as Stockport County took on Curzon Ashton. County got off to a slow start, with Curzon piling the pressure on and even finding the back of the net in the 6th minute, only to be flagged offside. County began to find their footing in the game and came close in the 18th minute, with Nyal Bell drilling a shot narrowly wide. Both teams continued to come close but in the 43rd minute Curzon’s Danny Morton took down Ash Palmer in the box and County were awarded a penalty. Sam Walker stepped up and smashed it home, giving the visitors a 1-0 lead heading into the break. County came out in the second half looking to really take control of the game and build on their lead. Elliot Osbourne came close in the 61st minute after a good spell of possession but couldn’t keep his shot down. The 68th minute brought plenty of drama as Curzon’s Cameron McJannett received a second yellow card and was given his marching orders. In the aftermath one member of each sides backroom staff were sent to the stands. With Curzon down to ten men County pushed to add to their lead, and Osbourne was the man to do so. In the 74th minute he cut in from the left and found the top right corner to double County’s lead. They would comfortably see out the rest of the game to record a 2-0 victory.

John Askey took his Shrewsbury Town side to play AFC Wimbledon on Saturday. Shrewsbury started the game well, pressing the Wimbledon defence early on but to no avail. Wimbledon retaliated however, driving forward whenever they had the ball, and in the 34th minute James Hanson opened the scoring from a corner. Askeys men went in behind at the break. Shrewsbury came out looking much better in the second half, with Fejiri Okenabirhie coming close early on. In the 58th minute Shrewsbury found an equaliser thanks to an unlikely goal-scorer in Luke Waterfall. Waterfall latched onto a loose ball in the box and smashed it home to pull one back for the visitors. Shrewsbury really kicked on from here with Josh Laurent, Ollie Norburn and Anthony Grant having chances to take the lead. In the 89th minute Shrewsbury finally found the winner. Waterfall got his second of the game when Greg Docherty sent a ball to the back post and Waterfall headed home. The game ended 2-1 to Askey’s men.

Jordan Clark also featured on Saturday afternoon, playing on the left-hand side of the Accrington Stanley midfield against Coventry City. The game got off to an exciting start, with both teams having chances within the first 5 minutes. Stanley began to take control of the game, launching attack after attack. Our client Jordan Clark came close on numerous occasions and caused all sorts of problems for the Coventry defence. Stanley had their best chance to get in front in the 36th minute when Clark played a lovely 1-2 with Billy Kee, but his resulting shot hit the bar. Neither side could break the deadlock before half time and went in at 0-0. The reds came out in the same fashion they finished the first half, with Billy Kee coming close on numerous occasions. It was in the 58th minute when they finally had a breakthrough. Offrande Zanzala received the ball in the area, side stepped his mine and fired home for his sixth goals of the season. Coventry began to get back into the game and grab an equaliser, and they did so in the 87th minute courtesy of Michael Doyle. The game ended 1-1.

Clients Danny Whitaker and Keith Lowe were involved in Macclesfield Towns game against Bury. Danny’s side started off well, with Lowe and Peter Vincenti coming close from headers in the first 10 minutes but in the 14th Bury found a way through. Macc keeper Rhys Taylor came out for a cross but couldn’t clear the ball and Neil Danns was ready to slot home when the ball fell to him. Bury doubled their lead just four minutes later, with Danns getting his second of the game thanks to an incredible long range effort. Dannys men tried to find a way back into the game, and in the 31st minute Ben Stephens calmly chipped the Bury keeper to pull one back for Silkmen. Macclesfield started to come into the game and apply some pressure, with Harry Smith and Stephens both coming close on multiple occasions but in the 44th minute Bury got a third. Jay O’Shea scored from a free-kick on the edge of the area to restore their two goal advantage. The seconc half saw Macc have multiple chances early on, with both Stephens and Scott Wilson coming agonisingly close to finding the back of the net. Whilst the Silkmen were applying pressure, Bury caught them on the counter attack and in the 60th minute Nicky Maynard found the back of the net to make it 4-1. Danny’s men continued to try and decrease the deficite, but to no prevail and the game ended in a 4-1 loss for the Silkmen.

Steve Watson took his Gateshead side to top of the league Wrexham at the weekend. They started the game lively, with Steve Rigg testing the Wrexham keeper twice in the first ten minutes but in the 18th minute Wrexham took the lead. Paul Rutherford sent a ball into the box Wrexham, only for it to deflect of Fraser Kerr and end up in the back of the net. Gateshead swithed to a three at the back for the second half, hoping to find a way back into the game. They started the half well, with Scott Boden looking dangerous in attack. However in the 69th Wrexham doubled their lead. Brad Walker connnected with a James Jennings cross to find the back of the net. The Heed pushed forward to try and find a way back into the game and in the final few minutes it seemed there was hope. Luke Armstrong and Luke Molyneux both had shots blocked in the area but the ball landed with the former who slotted home to give his side a lifeline. They went into added time hoping for an equaliser but it wasn’t to be. Wrexham’s Rekeil Pyke finished the game off with a goal in the 90th minute for the hosts and the game ended 3-1.

Our final client in action over the weekend was Gregor Buchanan. He started in the middle of the Greenock Morton back line during their game against Partick Thistle. Morton started slowly, with Thistle managing a few chances in the opening minutes, and in the 15th they found a way through and took the lead, courtesy of a Brice Ntambwe bullet header. Morton kicked on after going behind, and just eight minutes later they got an equaliser. Jack Iredale and Gary Oliver combined well down the left-hand side, and the former sent in a fantastic cross for Oliver to finish. Morton continued to attack in search of a second, and it came in the just before half time. Iredale once again sent in a dangerous ball, and Bob McHugh met it well and headed home for the hosts to put his side in the lead. Morton continued in the same vein during the second half and in the 55th minute provider turned goalscorer as Iredale finished at the back post. The blues didn’t stop there however, and just 11 minutes later they made it 4-1. McHugh robbed a defender of possession inside the box and finishes with style, slotting past the Thistle keeper at the far post for his 7th of the season. Morton went on the make it 5-1 in the 72nd minute, with Michael Tidser hitting a shot from distance low into the right corner to finish the game off. Even with a four goal advantage, Morton wanted more and came close on numerous occasions in the closing minutes, with BKM client Gregor Buchanan and Bob McHugh having chances, but in the end the game ended with a comfortable 5-1 victory for Morton.