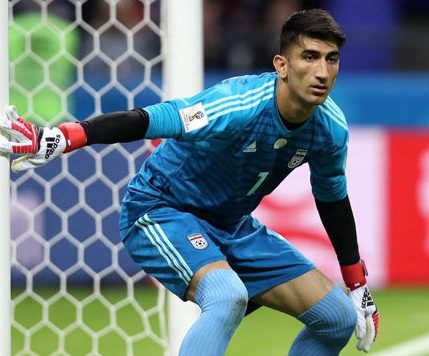 Alireza currently plays in goal for Persepolis in the Iran Pro League, but his career started with Naft Tehran. He made his first team debut for Naft Tehran in 2011, and quickly established himself as their first-choice keeper. During his first season as number 1 Naft Tehran finished 3rd in the Pro League, qualifying for the AFC Champions League for the first time in the club’s history.

By 2014, Alireza was called up to the Iran national football team training camp and named in the 30-man provisional squad for the World Cup. Unfortunately, he didn’t make the final squad, but he was called up for 2015 AFC Asian Cup.

During this time, Alireza caught the eye of the mainstream media in Europe. His trademark 70-metre throw went viral when he provided an assist for a teammate (watch it here).

In 2016, after 70 appearances during his time with the club, Alireza decided to leave Naft Tehran, joining Iranian giants Persepolis, and has played over 50 times for the club since his move. Alireza even set an Iran Pro League record in December 2017, going 718 minutes without conceding a goal.

When the 2018 World Cup Qualifiers came around, Alireza cemented himself as the undisputed number one, resulting in him being named in Iran’s World Cup Squad. He would go on to play an integral part in Iran’s World Cup campaign, with a personal highlight being a fantastic penalty save against Cristiano Ronaldo during Iran’s surprise draw against Portugal. Iran finished in 3rd place in group B, just one point away from progressing to the later stages.