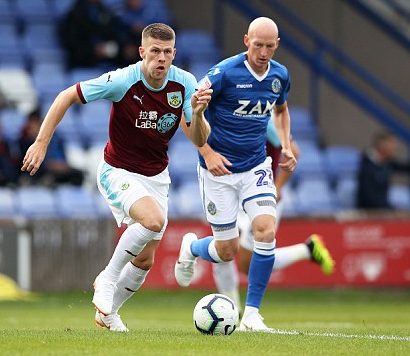 Over at Macclesfield Town, two of our clients featured in the emphatic 5-1 win at Ashton United. A Harry Smith brace, followed by strikes from Nathan Blissett, an unnamed trialist and our very own Danny Whitaker saw the Silkmen ease to victory. Whitaker showed how valuable he still is in the centre of midfield with a commanding display and was rewarded for all of his hard work on 19 minutes when he grabbed a goal.

Fellow BKM client Keith Lowe was introduced in the 60th minute to see out the match and get Mark Yates’ Macclesfield tenure off to a winning start. Their second game wasn’t as successful, with the Silkmen losing 1-0 to Altrincham. Lowe started the game and played for 60 mins, whilst Whitaker was introduced on the hour mark.

Macclesfield’s next match was against Premier League side Burnley, at Moss Rose. Whitaker started in the midfield, with Lowe on the bench. The game got off to a flying start with Burnley already on the counter attack five minutes in, and they may have scored if is wasn’t for Whitaker, tracking back brilliantly to head Johann Berg Gudmundsson’s cross over the bar. Both sides were getting forward and attacking with Koby Arthur forcing a strong save from Tom Heaton but it was Burnley who would break the deadlock, with Aaron Lennon placing the ball past Rhys Taylor to give the Clarets the lead.

Burnley would go on to double their lead just after the second half started, with Gudmundsson curling in a free-kick from the edge of the box. The Silkmen would continue to fight however, with Whitaker coming close with an effort from just outside the area, however his shot was well blocked. Burnley would see out the rest of the game and record a 2-0 win.

Next up for the Silkmen were Wrexham. Keith Lowe started the game at the heart of defence, with Whitaker on the bench. The Silkmen got off to an impressive start with multiple chances, however it was Wrexham who would open the scoring in the 23rd minute thanks to defender Manny Smith.

Macclesfield had a couple more chances before the half time whistle but couldn’t make anything of them, ending the first half a goal behind. The second half started in the same vein as the first, with the home side coming close once again. Whitaker was introduced and began dictating the play, with the Silkmen looking more and more dangerous. The equaliser finally came in the 79th minute, with Harry Smith getting on the end of a Jared Hodgkiss cross. The Silkmen were continuously pushing right until the last minute but couldn’t find a winner and the game ended 1-1.

Macclesfield’s final pre-season game was against Stockport County at Edgeley Park. Whitaker started in the middle of the park with Lowe on the bench. Whitaker began as he meant to go on, majestically releasing Scott Wilson, but his shot was stopped by the County keeper. Two minutes later Whitaker slotted the ball through for Miles Welch-Hayes who pulled it back for Wilson, but Ash Palmer swooped in with a last gasp interception to prevent the ball reaching its target. It only took the Silkmen a few more minutes before they finally broke the deadlock, with Michael Rose’s corner finding the head of Smith, with the newcomer slotting home his 4th goal of pre-season.

Macc would continue to dominate, however County would manage to pull one back, with Palmer getting on the scoresheet for the hosts. The Silkmen continued to dictate the game, but to no avail and went in at half time level. The rest of the game continued in the same fashion, with Macc on the front foot for the majority of the match, but unfortunately their efforts didn’t lead to a winner, and they ended their final match of pre-season with a 1-1 draw.